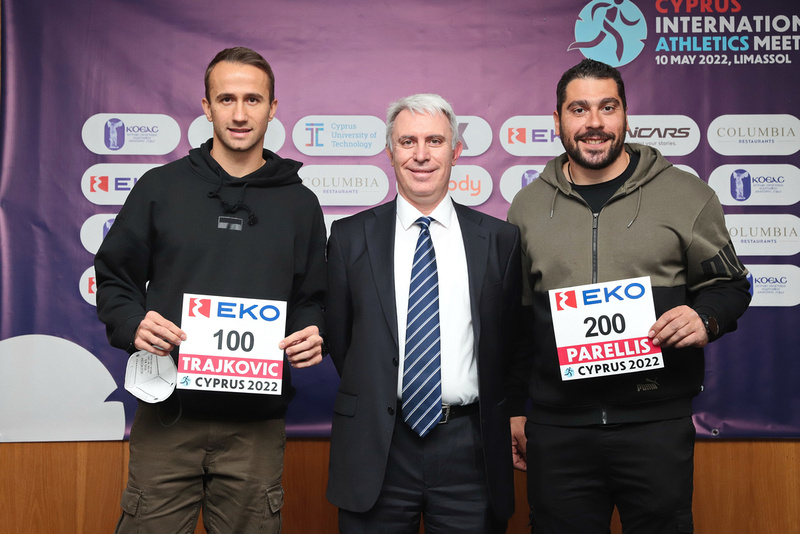 Nicosia 30th March 2022 – In support of initiatives that promote values of excellence and noble rivalry, which sport represents in the best way possible, EKO Cyprus enhances the effort of the Cyprus Athletics Association, the body who is organizing the first International Athletics Meeting.

Thus, reciprocating the trust of the public – EKO Cyprus firmly stands by the efforts that raise the level of Cypriot sports.

EKO, supporting the international meeting as platinum sponsor, will have their logo placed on the athletes’ official uniforms, whose participation is expected to excite and thrill the audience, achieving many records and distinctions. In a press conference on Tuesday, 22nd March, the CAAA (Cyprus Athletics Federation) presented the 1st International Meeting, under the name «Cyprus International Meeting» which has joined the European Permit Meetings of the European Federation.

In his speech on EKO’s support of the meeting, CFO of EKO Cyprus, Mr Ioannis Doratis said, “We are fully aware of the efforts needed to compete and remain at the top. Our company holds first place by a large margin, in liquid fuels, consistently ensuring the energy autonomy of Cyprus with top quality motor fuels and services of the highest standards. The very least we could do is support and reward our athletes. We wish the organizers success in their goal to establish this event and promote classical sports in Cyprus. To all athletes, we wish them every success in reaching their personal goals and to record their best possible performance. We will next to them applauding their efforts!”

The 1st International meeting, under the name«Cyprus International Meeting» will take place on Tuesday, 10th May 2022 at Tsirio Stadium in Limassol. At this big event, famous athletes from Greece and Europe have been invited to take part. One of them famous athletes already confirmed to take part is Tokyo’s Long Jump Gold Olympic Medalist and World Indoor Champion Miltos Tentoglou!

HELLENIC PETROLEUM CYPRUS LTD is a wholly-owned (100%) subsidiary of the HELLENIC PETROLEUM INTERNATIONAL GmbH. The company is active in the import, storage, transportation and marketing of liquid fuels, lubricants and LPG to commercial and industrial customers. Through a network of 97 service stations under the EKO trade mark, EKO hold the leading position in liquid fuels in Cyprus. The company undertook the transportation of the oil and gas facilities fromt eh Larnaca coastal line to Vasiliko, an investment that will exceed 50 million euros. The contribution of Hellenic Petroleum Cyprus to the labor market is equally important: more than 1,500 employees are employed directly or indirectly by the company and its partner companies and service stations under the EKO brand.

About Hellenic Petroleum Group of Companies

The Hellenic Petroleum Group of Companies listed on the Athens and London Stock Exchanges, is ranked among the 100 largest energy companies in the world and is a leading player in energy developments in the wider region of South East Europe with a turnover of more than 10 billion euros. The group’s headquarters are in Greece and has presence in many other countries in the region. The group’s activities cover a wide range in the energy sector with privately owned refineries and gas station networks, production and marketing of petrochemicals, exploration for hydrocarbons and production and marketing of electricity. Recently, the Group announced its new strategy, which is to develop in the field of renewable energy sources with significant investments in the group’s efforts to reduce its carbon footprint.